Home Dr Zhou in the Media Chinese Healing in Milwaukee

Dr. Zhou Brings the East to the West 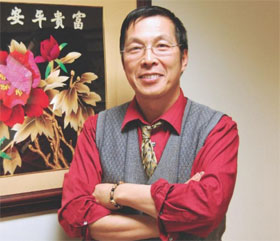 In 1993, Chinese doctor Xiping Zhou came to the U.S. with minimal knowledge of English and $400. Today, with over 25 years of practice, Zhou has treated thousands of patients with physical and psychological illnesses through his integrated approach to acupuncture, herbal medicine and medical massage. Zhou established a private practice in Madison (1996) and on Milwaukee’s East Side (1997) before being hired by Columbia St. Mary’s Hospital (1999). He is the first acupuncturist in the state to work in a Western medicine facility.

With a passion for teaching, Zhou has educated thousands of acupuncture and massage therapy students. In 2000, he founded the East-West Healing Arts Institute and in 2008 the non-profit organization Madison Community Family Wellness Clinic to expand access to alternative health care to those with limited incomes.

You are a Chinese trained medical doctor, plus an acupuncturist and an herbalist. What prompted you to leave China after they invested so much in training you, and how did you end up in Wisconsin?

It was a hard decision to make, but I saw the opportunity to share my knowledge and expertise in traditional Chinese medicine in a country where acupuncture was in its infancy. I came here in 1993 for an international Oriental medicine conference after which I was invited to give lectures to acupuncture and massage schools in Los Angeles, New York, Philadelphia and Baltimore. After receiving a job offer, I moved to Wisconsin in 1993 to teach acupuncture at the Midwest College of Oriental Medicine in Racine.

In simple terms, how does acupuncture work? What is the underlying theory of how inserting very thin needles into various trigger points in the body produces healing effects?

By inserting needles into specific “acupressure” or “trigger points,” acupuncture promotes natural healing in the body. This improves the recipient’s mental and physical functioning. The underlying theory is that channels of energy, called meridians, run in regular patterns through the body, and when these paths are obstructed, people experience discomfort or illnesses. The insertion of fine needles, which help release the obstruction, promotes the production of chemicals in the brain such as endorphins and serotonin, which reduce pain and balance the emotions.

What are some of the common problems that acupuncture can cure and what have your success rates been with these?

Some of the common problems for which acupuncture is an effective cure are pain, sleeping disorders, anxiety, depression, hormone imbalance, autoimmune disorders, weight loss and digestive disorders. I have seen a lot of success in treating acute and chronic pain and women’s health issues, including migraines; fibromyalgia; neck, shoulder and lower back pain; arthritis; fertility problems and menopause.

If someone said, “I would like to try acupuncture, but I am a little nervous about having someone put needles in me,” what would you tell them? Are there any risks to acupuncture and does it hurt?

Generally, acupuncture has very minor side effects, which may include slight bruising or mild aching when the needles are inserted. The sterilized, disposable needles that we use are very fine and thin—some are just six times the diameter of a strand of hair. Acupuncture has been practiced in the United States since the early 1970s and there have been no reports of any major complications.